Ilene...what am I going to do with you?

Ilene has...well Ilene has personality. There's no getting around it. She's the official instigator kitten. If there's trouble, chances are she's in the middle of it. She's the first one out to explore in the morning. She believes that humans exist to pet small tortie kittens. She walks up to people and bats those beautiful gold eyes, daring them not to go awwwww!
The Butterbean girls sleep in the bathroom at night. I usually send them to bed about a half hour before I go. I'd tucked the girls in and was getting myself ready for the night. I opened the door and looked around to figure out who was where.

As usual, Jo and K were on the bathroom vanity. 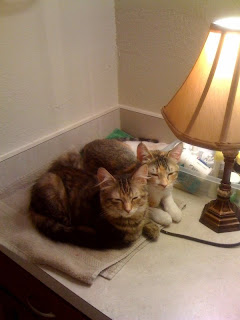 No Ilene. I looked around a moment, then did a double take. 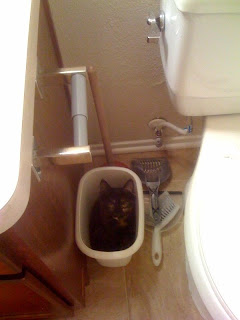 There in the (clean) trash can slept Ilene. She opened her eyes and I got a nice, long blink. 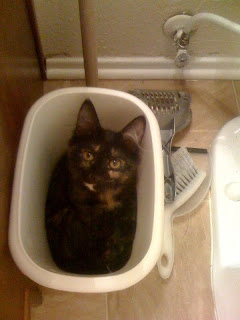 "What? It's comfortable. What's the problem human?"

What are you going to say? Even Kirsten couldn't come up with anything. 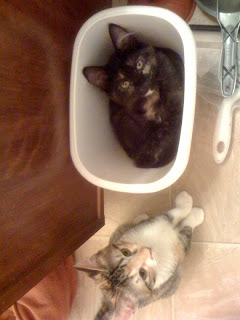 This isn't an argument I was going to win. So I scritched heads, turned off the lights, and proceeded to tuck myself into bed. As of now, the trash can is officially Ilene's favorite place to sleep.

That's Ilene for you. She marches to her own drummer.
Posted by Clara at 2:24 PM